The Cellular Jail, which is also known as Kala Paani (Back water), is the most prominent landmark of Port Blair as well as the entire Andaman and Nicobar Islands. This colonial prison situated in the Andaman and Nicobar Islands was used to exile political prisoners, especially freedom fighters of India by the British. The Cellular Jail has to tell many stories of cruelty of British rulers and hardships suffered by the prisoners in this isolated island. No visitor can leave this place without tears in their eyes. This complex is now a famous national memorial monument of India. 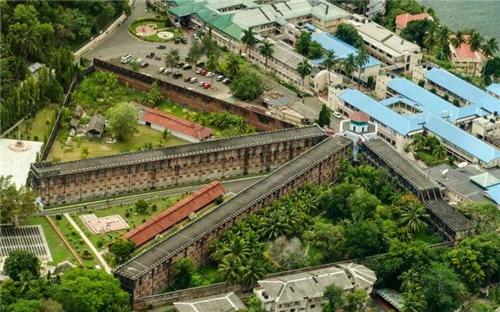 British had been using Andaman Islands to imprison and punish the Indian convicts since immediately after the first War of Indian Independence. Soon after suppression of rebellion, the British executed many rebels. Those who survived were exiled to Andaman Islands to prevent them from re-offending. They brought two hundred freedom fighters to the islands. Later many prisoners were transported to the islands from Burma and India. British considered this place as a suitable place for punishing the freedom fighters. The isolation of the islands from mainland and the overseas journey to reach here threatened the prisoners with loss of caste that result in social exclusion. Many people were died due to diseases and those who survived were used to colonize the island for the British by constructing prisons, buildings and harbour facilities.

When, the independence movement became stronger in the late 19th century, more prisoners were sent to Andaman Islands that resulted in the requirement for a high-security prison. Charles James Lyall, home secretary in the Raj Government and A. S Lethbridge, a surgeon in the British administration conducted an investigation on the penal settlement at Port Blair and reached in a conclusion that convicts preferred to go to the islands rather than be imprisoned in Indian Jails. This finding brings a recommendation that a penal stage should exist in the transportation sentence to get harsh treatment for the prisoners. It resulted in the construction of the Cellular Jail. 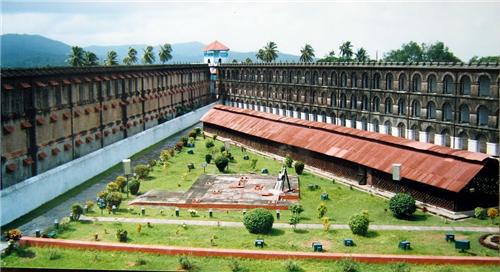 After Independence, two wings of the Cellular Jail were demolished. But, several former prisoners and political leaders protested it, as they thought that would erase the tangible evidence of the torture they suffered. So, the central tower and the remaining three wings were converted into a National Memorial in 1969.

The construction period of the Cellular Jail was between 1896 and 1906. The original prison was a puce-coloured brick building. The bricks used to construct the building were imported from Burma. The building had seven wings with three stories and with a tower at the centre that served as the intersection. The guards used the tower to keep watch on the inmates. The Jail with the seven wings in straight line from the tower looks like a bicycle wheel. There is a large bell in the tower, which was used to raise alarm in any emergency situation. The jail has a total of 693 cells each of which is 4.5 meters x 2.7 meters in size. It has only a ventilator at a height of three meters. The design of the spokes here is such that the front of a cell in a spoke is faced to the back of cells in another spoke. It makes the communication between prisoners totally impossible. So, all the prisoners in Cellular Jail were in solitary confinement. These designs of the cells gave the Jail the name Cellular Jail. 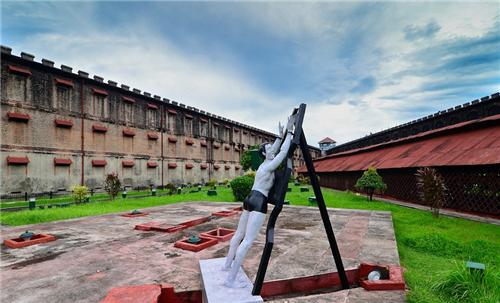 Matrys Memorial inside the jail is the first stop for all visitors of the Islands. The sight of flogging stand, oil mill and other instruments of torture are displayed in the jail museum that wet the eyes of every visitor who love India. The Sound and light show performed every evening in the Jail is another must seen thing during the visit of Cellular Jail, as it reveals a dark chapter in the history of the Islands as a penal settlement. The watch tower, at the center of the wings is another interesting spot here, as it gives a splendid view from the top, especially of the North Bay lighthouse.

A visit to Cellular Jain in Andaman and Nicobar Island is an opportunity for all Indians to remind that the freedom we enjoy now is a gift by thousands of courageous and patriotic people who suffered lots of cruelty and hardships during their life imprisonment in these islands. No one can return from here without saluting those freedom fighters in mind.