There is a group of 3000 islands in Andaman and Nicobar Islands among which some are islands and others are islets and rocks. Two important islets here are Ritchie Archipelago and Labyrinth Islands. The topography of Andaman and Nicobar Islands consists of a long range of hills with lush green forests. A series of mountains and ridges with moderate elevation and sleep are seen in islands. Among the 527n islands formed by submarine mountain range that separates the Andaman Sea from Bay of Bengal, only 36 are inhabited. Among them, 26 are in the Andaman Group and the remaining in smaller Nicobars. 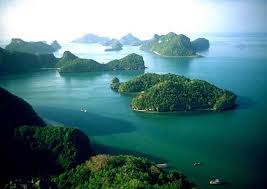 Port Blair, with an area of 6.425 sq miles (16.64 square kilometres), has a tropical monsoonal climate. It experiences a dry season and a heavy monsoon for the rest of year. There is no cold season here. We can experience an average temperature of 26.2 degrees Celcius (79.2 degrees Fahrenheit). Total annual precipitation that averages 2872 mm (1131.1 in) and annual sunshine that averages 2405 hours are the other weather features of Port Blair. Andaman Nicobar Islands with a humidity about 80% and varying temperatures between 23 degree celsius and 31 degree celsius experience a more or less uniform climate without extreme chilly winters or hot summers.

North East Monsoon comes in November here, while the South West Monsoon starts at the end of May. The forest is rich with lush green and beautiful water falls between May and December, natural lovers usually this period to visit Port Blair. But, December to April is the best time for divers and bird watchers usually select winter months. An almost steady climate makes this island suitable for all types of adventurous activities like snorkeling, swimming, boating and diving etc all 12 months in an year.

The soil and vegetation of Andaman and Nicobar Islands is suitable for tropical ever green and semi-evergreen forests. As rainfall is common in these islands, thick forest grows here soon. Soil and vegetation here is also complementary to each other and so it supports the growth of epiphytic plants (Plants that grow on other plants). But, the vegetation of Nicobar Islands, which marks the absence of deciduous forests, is characterized by grasslands. Another important vegetation here is coconut trees. You can see a long array of coconut trees which are dotted on the coastline of the island. Coconut trees outline the entire fringe of the island. Paddy is the main crop that is cultivated in the Andaman Groups of Islands. Coconut and areca nut are the important cash crops of these islands. Different kinds of fruits like mango, orange, sapota, papaya, banana, pineapple and some root crops are also grown here.