Mount Harriet island national Park is one of the nearest wilderness areas to the Capital port Blair. The Park located in the Ferrargunj tehsil of Andaman and Nicobar Islands. The park is one of the popular tourist spot near Port Blair due to its historic importance and natural beauty. 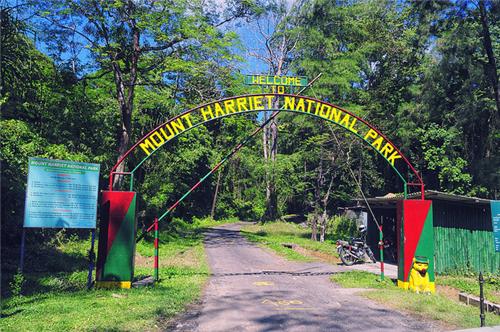 The national park spreads over an area of 46. 62 sq. km and it is proposed to increase by 25.55 sq. km by adding Mount Harriet peak and other surrounding areas to the park. It is located at a distance of 20 kms from the capital twon of Port Blair. The park homes several highest points in Andaman and Nicobar islands. The general elevation of the area varies from sea level to 459 meters. The area includes steep precipitous slopes and gentle slopes with undulating terrain. Some important peaks in the park are Mt. Carpeter (346m), Mt, Koyob (459), Mt. Hext (425), Mt. Harriet (422) and Mt Goodrige (376). The coordinates for the Mount Harriet in the islands are 920 to 940 E Longitudes and 100 to 140 N Latitudes. It has dense evergreen and semi evergreen forests that have outstanding natural beauty. The entire national park forms a chunk of the hill ranges in the eastern part of south Andaman Islands.

Mount Harriet got the name from the name of Robert Christopher Tytler’s wife. Tytler, who was the soldier in the British forces, was appointed as officiating Superintendent of the Convict Settlement in Port Blair region from 1862 to 1864. He was knowledgeable of nature and passionate for photography. Mount Harriet National Park was set up in 1979. It was the headquarters for the British Chief Commissioner during British regime.

Mount Harriet National Park is rich with various types of fauna and flora, which make it the most favourite tourist destination of nature lovers.  It homes 90 species of birds, out of which 11 are endemic. 27 species of reptiles and amphibians including 12 endemic species are reported here. The important reptiles reported from the park are King Cobra, Andaman Cobra and two nesting marine turtles-green sea and Olive Ridley. You can see around 12 species of mammals in the park such as endemic Andaman Pig, bats and Shrew. It also homes 120 species of moths including many new species. Many people visit here to see the animals like saltwater crocodiles, robber crab, turtles and wild pigs.Sight of large elephants that are trained for carrying large logs can also be seen in the park.

Mount Harriet Marine National Park supports all major forest types in the Andaman and Nicobar Islands namely Evergreen Forest, Andaman Moist Deciduous Forests, Andaman Semi-evergreen Forests and Littoral Forests. The park is also rich with 393 plant species that includes 74 endemic and 51 introduced species. Ceropygie andamanica and Drypetes ellis are the two new species of plants that have been recently described from here. Another new record for Andamans from the park is ephiphytic orchid - Thrixspermum merguense.

Port Blair city, Havelock Islands and Ross island are clearly visible from the hill top of Mount Harriet. Many people, who visit the park, go for the trek up to Madhuban, which is a natural and famous trek. It gives the tourists an opportunity to see large number of birds, variegated animals and butterflies. As the park homes several wild animals, this place is suitable for wildlife tour. You can also enjoy the beautiful views of the natural sights of Andaman and Nicobar Islands, if you avail a ferry or taxi from the Chatham Wharf to the Bamboo flat. It is also a suitable place for bird watching.

Foreign tourists have only 30 days permit to stay in the island and it can further be extended, if prior permission is taken for more 15 days. Immigration authorities have the right to allow such stay. Middle Andaman Island, South Andaman Island, Little Andaman Island, Neil Andaman Island, Long Island, baratang, Havelock Island, Diglipur and North Passage are the places that can be used for stay in the Andaman and Nicobar Islands. You can see some good resorts here named Fortune Resort Bay Island, Sun Sea Resort and Megapode Nest etc. Besides, Port Blair has several hotels with various price ranges.

There are regular buses that can be boarded from the Andaman Teal House to the Mount Harriet National Park. You can also depend on vehicle ferry services from the Chatham jetty towards the bamboo flat, on the Port Blair side at a rate of Rs 4 per person. Traveling to the national park in the ferry takes about 20 minutes. There are 7 km from bamboo flat jetty towards the check post, which can be reached in around 10 minutes. From Check post to the Mount Harriet is about 3 km. Entry fees are required to get in the park and tickets for the camera are also be issued here.

January to March is the most suitable time to visit the Mount Harriet National Park, as the climate here during this time is pleasant and comfortable for a journey.